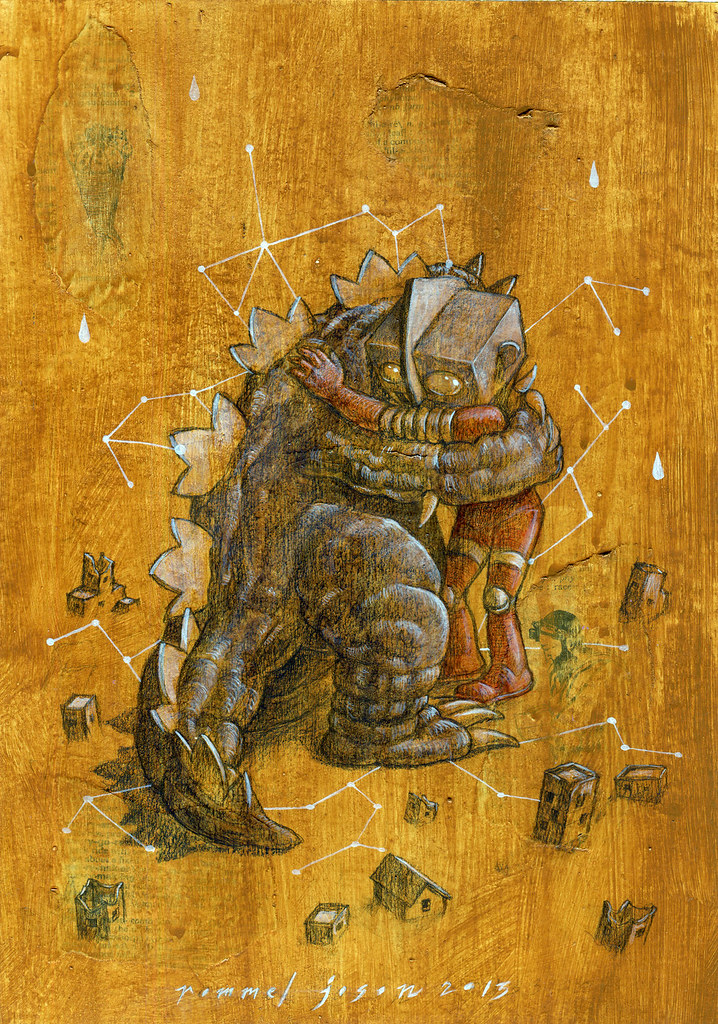 I’m part of an ongoing group exhibit entitled Collaborator. Organized by Boxplot, three artists from Australia and three from the Philippines were paired up to developed individual works that stem from online discussions (email, facebook, and skype) about the theme. Since this is probably one of the very few places my work will ever be seen, I thought I’d post the three paintings I did for the exhibit.

The theme “collaborator” has both positive and negative connotations. A collaborator could be a creative partner or it could be someone in collusion with an enemy or an invading force. Whether positive or negative, my partner and I we decided that the idea of a collaborator touched on questions of identity. A shared work obviously blurs the line of personal creative ownership while collaborating with an enemy calls into question one’s allegiance and identity.

On a basic level, I thought of the whole idea of collaboration as a mash-up. I tried to draw on my own country’s history with colonial powers and tried coming with up with pictures that reflected Philippine culture and history as a series of mash-ups between indigenous culture and the culture of an occupying force.

For the first work “Santo Santo”, I thought of it as a Spain/Philippines mash up. The costume of the main figure was something worn by the Filipino mestizos of the 19th century. It was a hybrid of European clothing adapted to local tastes. In the painting are two statues, the Santo Niño (Infant Jesus) and a bulul, a wooden figure used to guard the rice crop by the Igorot people of Northern Philippines.

Many Philippine Catholic homes have Santo Niño statues, and devotees would often ask favor from the icon, touching or rubbing the statue as if it was a talisman to bring favor or ward off evil. In some ways, it is similar to placement of bulul figures by ancient Filipinos to guard their granaries.

“Turo” is filipino for point. There are food stalls in the Philippines called “turo-turo” which literally means that you point at whatever you like to eat and they serve it up to you.

The central image is that of a “makapili“. A Filipino collaborator used by the Japanese during World War II to point out Filipino rebels from a line-up for execution. My grandparents told me that these collaborators often wore a “bayong” (a woven shopping bag) over their heads to hide their identities.

“Asa” or more accurately “Pag-asa” is Filipino for “Hope”. Filipinos can be fatalistic. It is not unheard of for people to throw all caution to the wind and let God sort out all problems. This may partly explain the popularity of TV game shows where Filipinos line up for hours just to get a chance to enter a contest in the hopes of winning a bit of money to alleviate one’s poverty.
This fatalism can be summed up by the phrase “bahala na” or something like “whatever will be, will be” or “come what may”. So you hear utterances like “bahala na ang Diyos” or “let’s leave it up to God”. This has mutated to the phrase “bahala na si Batman” (hence the central image), which is often used in Filipino conversations.
It is said that the Philippines spent 300 years in a convent and 50 years in Hollywood. Which seems to explain the country’s entrenched religious order as well as the Philippines’ love for American pop culture.
The Exhibit runs from Friday 25 April – Sunday 11 May, 2014
(Official Exhibition Opening Event: 6pm – 8pm Thursday 24 April)Where: 22 Gibson Street, BowdenEntry: Free / All Works for SaleOpening Times: 1pm – 6pm, Thursday to Sunday (including Anzac Day public holiday)